Anyone who looks at cable news in the United States for en extended period of time might ask the question: “Is this news at all?”.

The ubiquity of the media pundit, the professional commentator, has created a stream of invective, opinion and rhetorical denunciation that has little to do with news and analysis, and everything to do with the entertainment value of polarising opinion. After all, a considered centrist position that allows both discussion and compromise is less exciting than a helping of Fox and Friends or Real Time with Bill Maher.

Commentary pads the real news, framing events, and other commentator’s ideas of those events, with more than reactive hyperbole. It frames our representation of society.

Within the broader picture of society described by cable news, there is nothing so clearly framed as wholesale rejection of the idea of social class.

The idea of a working / middle / upper class segmentation of society was, in my younger days, pretty clearly understood. Working class people identified as ewxactly that, and it was fine to speak about a group called the working class. Today, the only time I hear social class mentioned is when the term “Class Warfare” is mobilized on Fox News, to demonize any change to the taxation structures that might increase the amount of tax that people on the very highest incomes [over $250,000] pay.

The rest of society is referred to as “middle class” – in terms of work, opportunity, social fabric – or the squeeze that is experienced in times of economic turmoil. The squeeze on the middle class.

Framing society as two groups,  a successful, wealthy group – “job creators”  – and a sprawling middle class implies an implicit absence of both low paid work and outright poverty in society. This bifurcation of social capacity is implicit in Marco Rubio’s [R-Florida] representation of American Society in his 2011 Senate speech:

While his idealistic vision of economic opportunity sees “class” as a temporary condition that is ultimately overcome – inexorably upward – by the indomitable spirit of the driven individual – the visible reality of social mobility and opportunity is very different – particularly for working class or poor people. 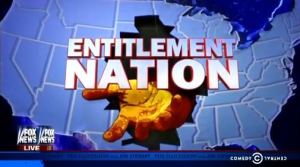 I live in a city in that has an unusually high number of families living in poverty, and the lack of social mobility, lack of opportunity and poor access to resources is not a question of will or a condition caused by lack of personal accountability. It is a way of being in the world that offers no transcendent narrative in which poverty is a temporary condition on the way to being a “have”.

Many of the poor and working poor [who work and work hard] are not temporarily embarrassed millionaires waiting for their turn. They are, and will be, poor for life, an invisible class that denies the triumphalist narrative of the self made individual.

Framing the idea of the situation of the working class as more than a rung on the ladder of opportunity is uncomfortable in a media landscape supported by aspirational advertising. When you rely on a media buy from a fast food chain to keep your business running, a story about raising the minimum wage is likely to create waves with the group who are your customers – as distinct from your audience.

Nick Hanauer’s TED Talk, later spread in Politico makes a clear appeal for the capitalist logic of boosting working class and service sector opportunities by raising the minimum wage. The controversy surrounding this talk’s initial removal from the TED site for being “explicitly partisan” and “unconvincing” seems out of step with the sense that TED is about spreading ideas.

In aspiring to a society based on merit and opportunity, the retreat into established battle lines sustains only the status quo. Equating constructive working class advocacy with class warfare is a pitchfork by another name, removing the poor from the broader social narrative.